Another round of FA Vase matches, brought a few more Sunday games and i decided to travel south of the river to Eltham, to see Cray Valley (PM) take on Hailsham Town who had travelled up from Sussex for this FA Vase 2nd qualifying round tie.

It must be a few season’s since i last visited the Badgers Sports Ground where Cray Valley play their home fixtures and a few things have changed most notably they are now head- tenants at the ground, with Greenwich Borough now the leaseholders, following their years as nomads.

There is now lots of red and black paint in Greenwich’s colours everywhere but Cray Valley still attracted a decent crowd today, with quite a lot of groundhoppers present and a few fans travelling up to support the opposition.

Cray Valley have had a decent start to the season in the Southern Counties East League Premier Division, sitting towards the top with a few games in hand on teams, after their recent cup exploits which have seen them reach the 2nd qualifying round of the FA Cup for the first time in their history, after what was by all accounts a thrilling penalty shoot replay win against Merstham in midweek and they now they face a trip to National League South Oxford City next weekend, a fitting way to celebrate their 100th season as a club.

In all honesty, today’s game was a little after the Lord Mayor’s show following their midweek heroics and whilst Cray Valley were very comfortable throughout the game, it never really completely came alive.

Cray Valley sit a tier above Step 6 Hailsham Town who play in the Southern Combination First Division and give or take the odd moment, it showed, as Cray were always in control of the game in terms of possession and attacking intent.

The opening goal came after a period of pressure, when Hailsham failed to close down midfielder Josh James and his low drive from 20 yards had too much on it for the keeper and it nestled in the bottom corner in the 13th minute. Hailsham had a couple of half chances in the first half without ever really stretching the Cray Valley goalkeeper and in the main it was the home side who dictated play, led by the very gifted Anthony Edgar who was technically head and shoulders above everyone else on the pitch, good close control, strength, quick feet and a turn of pace. He was excellent but also slightly frustrating as the one thing lacking at times in his game, was the ability to release the ball to a team mate when they were better placed. Very impressive and he comes with a pedigree i believe as a junior at West Ham and has had numerous other clubs in the league /  upper echelons of non league.

The second half continued in much the same vein as the first, with Cray Valley dictating the game, boasting most of the possession and continuing to fail to put the game to bed as they wasted a number of good opportunities or didn’t pick the right final ball. Hailsham for their part never gave up, had an excellent spirit and work ethic which a decent opening to the season has obviously helped build but they just didn’t really have the guile to open up Cray and other than the odd half chance again didn’t really create a clear cut opening.

The game was finally put to bed in the 80th minute when hard working forward Francis Babalola latched onto a ball over the top and coolly rounded the visitors keeper and made it 2-0 and that was pretty much that.

After their exertions in midweek, Cray Valley will have be happy with the result and progression in another cup competition, whilst the visitors will have been pleased with their efforts to contain a dangerous attacking side but will probably acknowledge they just lacked a cutting edge against higher level opposition and will go back to concentrate on maintaining their unbeaten league record.

All in all, a pleasant afternoon’s football in bright sunshine (the jacket proving unnecessary after a cloudy morning in London) at an excellent club, who provide everything a supporter could ask for ( excellent programme , an well stocked tea bar with friendly staff and by the looks of it a very busy bar). I look forward to returning again at some stage in the near future. 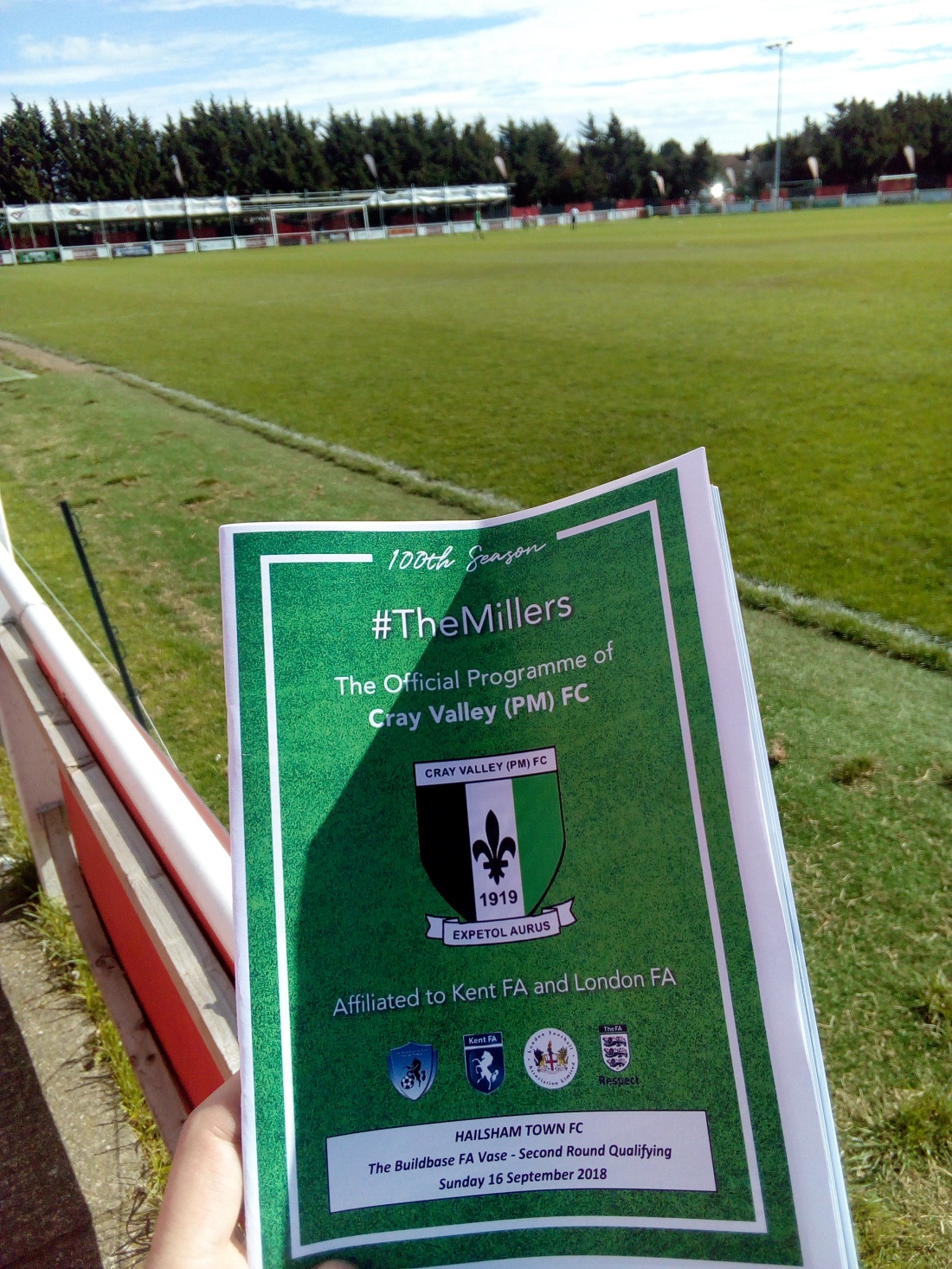