One of my pastimes in life, is visiting what would be to some far too many football grounds or to others ‘groundhopping’. I have being watching football at all levels since my first visit to Anfield back in 1979 and then at non-league grounds around the Merseyside area shortly afterwards.

I never tried to become a groundhopper, i suppose it just happened over the years and definitely in the last 10 – 12 years i have enjoyed actively seeking out new grounds to visit and planning trips, rather than it just happening to me through going to watch the various non-league and one particularly league team i support play at new grounds.

Over the last 10 years, the number of grounds i have visited, i have recently worked out has now grown to over 1000 and hopefully will continue to grow further as there are always new places to visit and add to the list.

Part of the enjoyment of visiting new grounds for me, is i suppose the act of visiting new places, going to places off the beaten track and beyond the usual tourist traps and if you can fit more than one into a day, so much the better (although yes i have many friends who think it madness but who then love hearing about where my travels have recently taken me).

So yesterday was one of those rare days, a 3 game day, which occasionally you get the opportunity to do, thanks to the vagaries of the fixture planners..

An early start from London , saw us arrive into Cannock about 10.30am for the now customary Morrisons breakfast (oh for the days of the recently finally demised Little Chef’s again, i am sure there is an article in me about them at some stage!) and then a short trip over to Pride Park, the home of Wolverhampton Sporting Community FC who were kicking off early today in a home pre-season friendly against higher level opponents in the form of Rushall Olympic. The game kicked off in the first slightly dubious weather we have seen for weeks (and the yellow-in-patches pitch showed what groundsmen have been up against this summer)… Rushall notched an early goal and despite having more of the play in the first half Sporting couldn’t find an equaliser. The second half probably didn’t flow as well due to the number of substitutions but Rushall gradually made their status tell and grabbed two further goals to give them a comfortable 3-0 result in the end. The ground was one of those i love, a little rough around the edges but with plenty of character and two great little stands behind one goal, which allowed the crowd to find shelter during a brief shower. None of those characterless kit stands so many clubs drop in these days off straight from manufacturers (although they were to come later in the day). It’s always fabulous to discover another ground with a little soul and with ongoing building work going on, on the side of the ground with a small grass bank maybe the club are adding to their facilities. All in all a great visit with the early kick off presumably due to a wedding reception later in the afternoon for which the sizeable club house was prepared. The club house did provide one of the days interesting questions and answers though, when the guy in front of me asked why his can of Tango was £1.50!! , quick as flash the reply came from the barmaid ‘ it’s the sugar tax darling’… or not as the case may be! 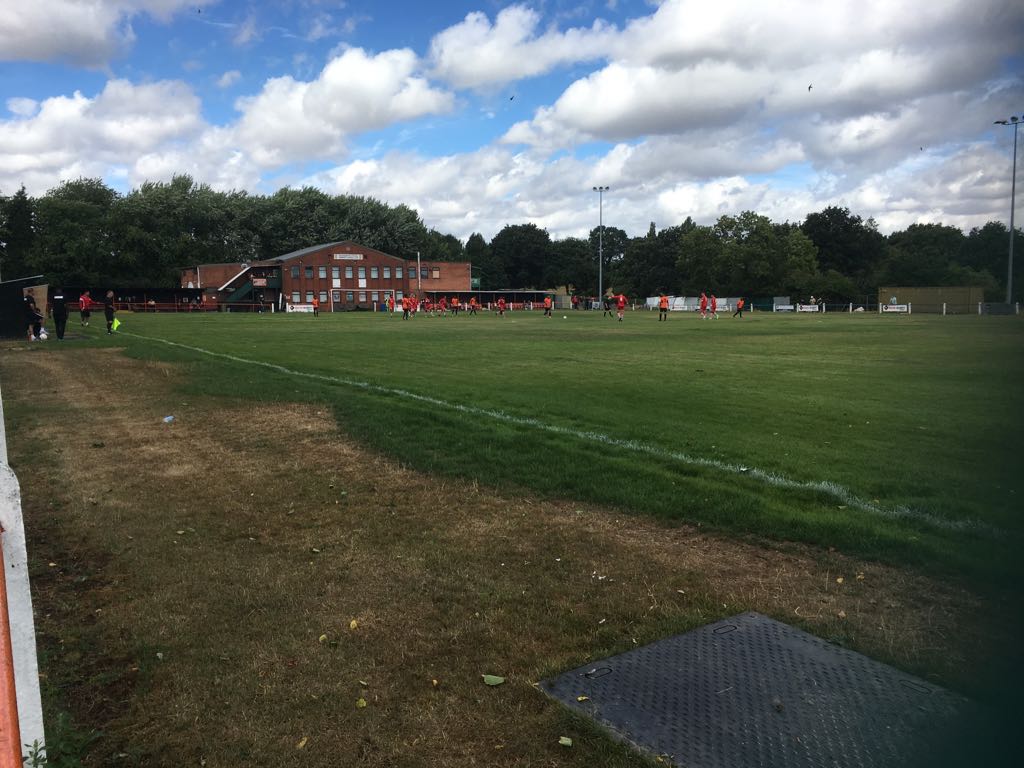 After Wolverhampton, it was a cross country run to the town of Shepshed in Leicestershire, home of Shepshed Dynamo who play their football in the Step 5 Midland Football League. I have visited the Dovecote before to see AFC Halifax Town visit in an FA Trophy game a decade or so ago but my travelling companion was enjoying a first visit. And an enjoyable game #upthebutthole it was (look up the location of Shepshed’s ground for the truth behind that one)!. The visitors were Stamford AFC from the Northern Premier League Evo-Stik East, who brought a decent number of fans with them. Both teams cancelled each other out without creating too much in the first half but in the second Stamford always had the edge and finally notched a couple of goals as the game entered it’s latter stages to secure a 2-0 win, although Shepshed looked a decent side on the day and will on this evidence be amongst the front runners in their division this season.

The ground was again was one of those lovely non-league grounds with real character, 3 stands of differing designs on 3 sides of the pitch and some low-ceiling covered terracing which provided some much needed cover from the passing rain again. A tidy club house and a well stocked tea bar at decent prices, all added to a pleasant afternoon. Hopefully the weekend’s rain will also have brought a smile to the face of the Shepshed groundsman, who is currently battling with what is quite possibly the driest pitch i have ever seen!

Then it was a quick run across country, weaving in and out of Nottinghamshire and Leicestershire, to finally arrive in Lincolnshire and our final destination of the day,  Eslaforde Park, the home of United Counties League side Sleaford Town.

The game against local rivals Deeping Rangers was actually a league game, with a few games brought forward to allow the league to be part of the organised Groundhop UK groundhop which took in various recreation fields and grounds in the United Counties League and Peterborough and District Football League. The more serious nature of the game added to the intensity and Deeping finally won out 1-0 winners, thanks to an early goal, in a game that held the attention throughout, without ever fully sparking into life.

Organised groundhop games always seem to bring out an additional item or two to the tea bar menu and the Spicy Sausage and Rice at £2 was a tasty bargain and must needed after a long day.

As for the ground, Eslaforde Park is one of those grounds, that divide opinion, a new build on the outskirts of town in 2005, it is what you would call functional, one dropped in stand, one small covered terrace, a large changing room building and not a lot else.. One of those grounds that provides a great base for a well run club to provide facilities for the community and junior teams but for the old fashioned side of me, lacks any real soul… 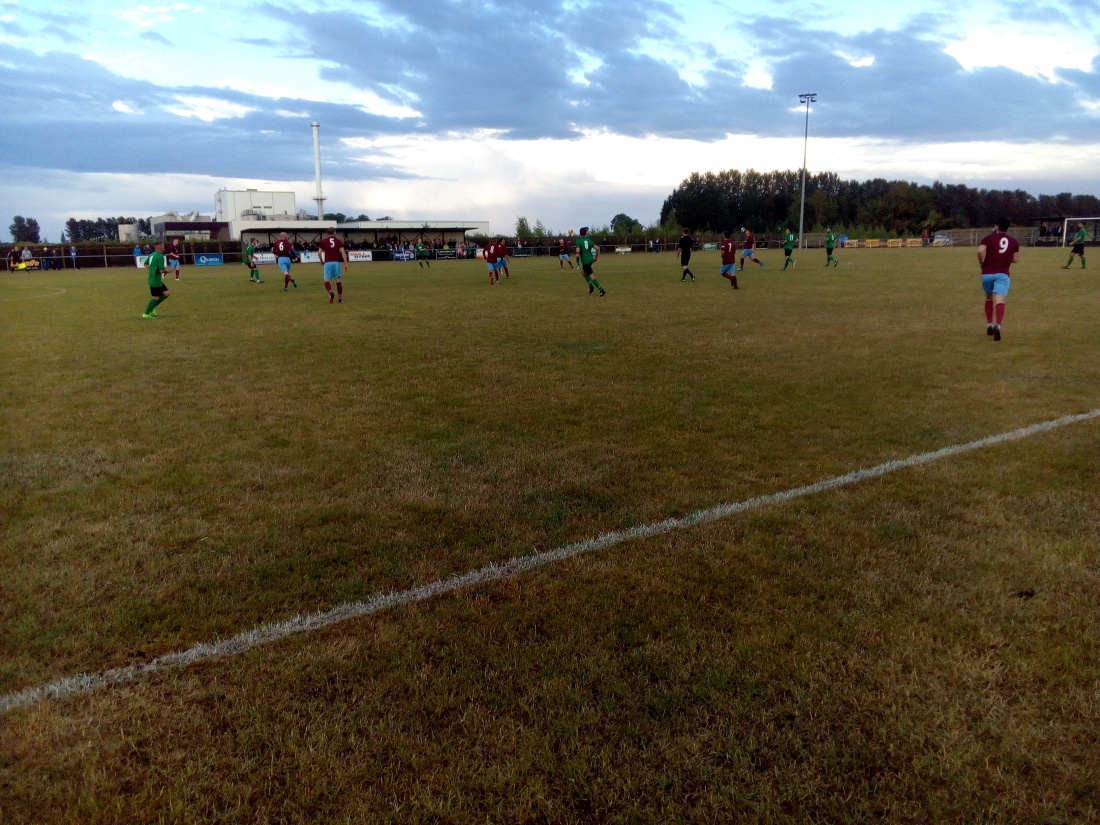 All in all though, a great day, 2 new grounds, 1 enjoyable re-visit and 3 decent games. Although apologies to all the home teams, who didn’t manage a  single goal between them, i hope it wasn’t down to our presence.